Within the CSOs as equal partners in monitoring of public finance project, 10 organisations from 7 countries have examined trends in public infrastructure projects in southeast Europe, including the role of the EU and financing institutions.

The regional study Public infrastructure in southeast Europe – in whose interest showed that infrastructure projects are often marred by lack of transparency and risk of corruption. There is a lack of public debate when public infrastructure projects are selected on a strategic level. Priorities are pre-decided by the authorities and almost never changed as a result of consultations. Public consultations, where they take place at all, are done at a very late stage when the decision to go ahead with the project has already been made. “Strategic” projects are usually anything but strategic and governments rarely provide compelling evidence in favor of prioritizing these projects.

Often it is mainly domestic and international 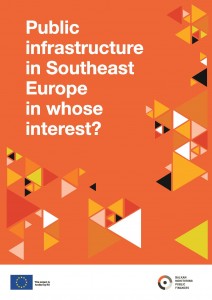 construction companies who benefit from projects rather than the wider public. In too many cases this appears to be the main driver for decision-making, leading to procurement procedures that raise concerns. Environmentally harmful options like coal power plants, motorway construction, and waste incineration still dominate investments. Although financing is available for eg. rail, wind and solar and recycling, governments in the region are not taking advantage of this.

In our Policy brief – Public Infrastructure in Southeast Europe – in whose interest you can read what we think needs to be changed by the local and national governments and by he the EU, international financial institutions and other project financiers. But we would like to emphasize that the selection of infrastructure projects must be based on real needs and must be demonstrated to be the most economically, socially and environmentally sustainable way to fulfill those needs.