Within the CSOs as equal partners in monitoring of public finance project, 10 organisations from 7 countries have examined trends in public debt in Southeast Europe, including the role of the EU and financing institutions.

The regional study Public Debt in Southeast Europe – Why to enable public participation? showed that the rising trend of public debt triggered alarm bells concerning the long term sustainability of public finances, especially given that the debt tolerance level is lower for lower income economies. The average debt in the analyzed countries went up from 25% of GDP in 2007 to 51% in 2016. Kosovo is the only country that has managed to keep debt lower than its pre-crisis level. All other countries are struggling to get their fiscal positions back on track. Unsustainable public finances and rising public debts are a threat to some of these countries. Thus, closely monitoring the debt movements is necessary and a timely response to unsustainable developments is of crucial importance for maintaining macroeconomic stability. 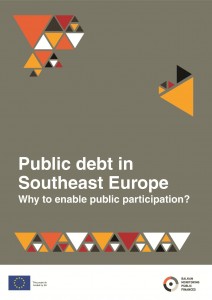 What emerges are some striking differences of opinion regarding IFI policy prescriptions and EU accession requirements in the area of public finance, based on differing assessments of their impacts in different national contexts, but also in relation to the priorities and needs of partners operating in these different contexts.

However, there were some areas of overlap in two important areas, which are unique in the existing CSO engagement in these issues.Firstly, the importance of informed participation by citizens in the affairs that directly concern them, through citizen debt audit mechanisms, that go beyond the need for independent institutional audit of executive bodies charged with public finance and enable a structured approach to CSO monitoring. Secondly, the importance of the reform of the tax system, not in terms of budgetary savings, but in financing public investment in jobs and growth; that is as one of the pillars of public finance sustainability.

In our Policy brief – Public debt in Southeast Europe – Why to enable public participation? you can read what we think needs to be changed by the local and national governments and by he the EU, international financial institutions and other project financiers. We would like to emphasize that we think Public Debt Management Mechanisms should be strengthened, why should there be greater Transparency and Accountability in Public Finance and how to set up an independent and fair procedure for debt resolution.